Power of attorney forms in New Hampshire provide a legal mechanism for an individual to designate someone to represent them in specific scenarios. That is, the individual appointed ("agent") would act on behalf of the individual who chose them ("principal"). There are numerous distinct types of power of attorney documents, with the financial and medical ones being the most popular. The document can be utilized after it has been filled out and signed in line with state legislation. 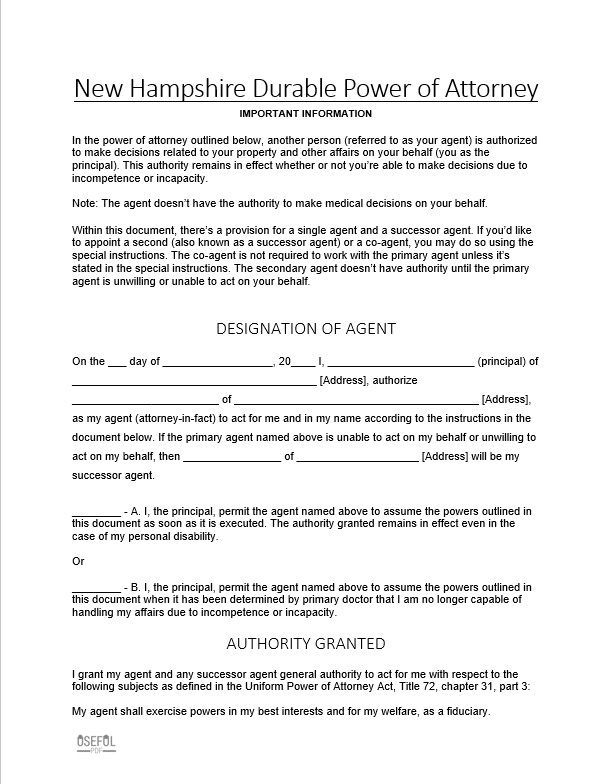 Durable Statutory Power of Attorney - A durable statutory power of attorney form in New Hampshire permits an individual ("principal") to delegate financial management to another individual ("agent"). Based on the principal's preferences, the authorities granted can be limited or extensive. The term "durable" refers to the fact that the power of attorney will continue to function even if the principal becomes debilitated. When acting for the principal, the agent has to provide this document to every third party after signing in line with State legislation.

General (Financial) Power of Attorney - The New Hampshire General (Financial) Power of Attorney Form lets you, as the principal, appoint someone to manage your finances for you (e.g., a companion, family member, or a qualified professional). After you provide the needed signature permission, this agent will be able to represent you in the matters you define here. As the principal, you must read over the provisions in this form and decide which types of authorities the agent should be granted, as well as when the form will be effective and when it will expire. Both parties have to read every component of the final product because it will describe the legal responsibilities that each has to perform.

Limited Power of Attorney - The New Hampshire Limited Power of Attorney Form is typically utilized to temporarily delegate principal authority to a representative or to engage in particular principal actions. This form can be customized to fit a variety of scenarios in which you might require someone else to act on your behalf. When the principal is allowing this designation of his/her desires to safeguard his/her interests against an absence, illness, or other events, this is often deemed smart. The goal of this document is to authorize a representative to act on behalf of the principal by carrying out his/her orders and exercising authority.

Medical Power of Attorney - According to RSA 137-J, the medical power of attorney form in New Hampshire permits a designated agent to exercise a principal's power and authority to make healthcare choices on his/her behalf. If (or when) the principal is unable to make choices for himself or herself, such an agent would exercise principal authority. As a result, if you are in an accident, under anesthesia for an operation, or otherwise debilitated, your designated agent will be ready to make choices for you and follow your wishes.

Advance Directive - An advance directive is a type of durable power of attorney that makes it possible for the declarant or principal to put their end-of-life treatment choices in writing. They also have the ability to appoint an agent to handle other medical matters on their behalf. It usually comes into effect when the principal is incompetent or incapacitated in some way. Like many other power of attorney documents, it must be signed and notarized before it can be considered valid.

Minor (Child) Power of Attorney - The caregiver of the Minor Power of Attorney Form in New Hampshire allows you to choose a person to make choices and/or take action on your behalf regarding your ward's matters. This is a good precaution since there are instances when a ward's parent(s) foresees being absent for an extended period, such as for military deployment, long-term hospitalization, or vacation, during which an elderly person has to assume responsibility for the ward's wellbeing.

Power of Attorney Revocation Form -  When you want to rescind a formerly granted power of attorney, utilize the Revocation Power of Attorney Form. When you decide to revoke a form, you must complete this document and distribute it to the appropriate persons. The goal of this document is to notify the agent of your choice to end the principal power delegated to him/her, as well as to give physical evidence of the effective date of that choice. Any organization that has been dependent on the power of attorney you are canceling should also obtain an appropriately executed copy of this form.

Motor Vehicle Power of Attorney - When you need a person to act for you at the New Hampshire Division of Motor Vehicles, you can utilize the New Hampshire Motor Vehicle Power of Attorney Form. This form of document will let your attorney-in-fact stand in line for you and handle your automobile documentation and titling. To ensure that the attorney-in-fact you name has the power to execute any acts with your car, you will need to provide specific details to the NH DMV. Ascertain that each list of detail is documented exactly as it appears on this entity's documents.

Download our free New Hampshire power of attorney in an instant to create a legally binding document.

Download our free New Hampshire power of attorney in an instant to create a legally binding document.