In Hawaii, a General (Financial) Power of Attorney is required to demonstrate that an individual (principal) wishes to appoint another (agent) to act on their behalf in financial, legal, or property matters. It’s designed to help you in situations where you are unable to handle your affairs on your own, or simply need someone to protect your interests for your convenience in daily life. 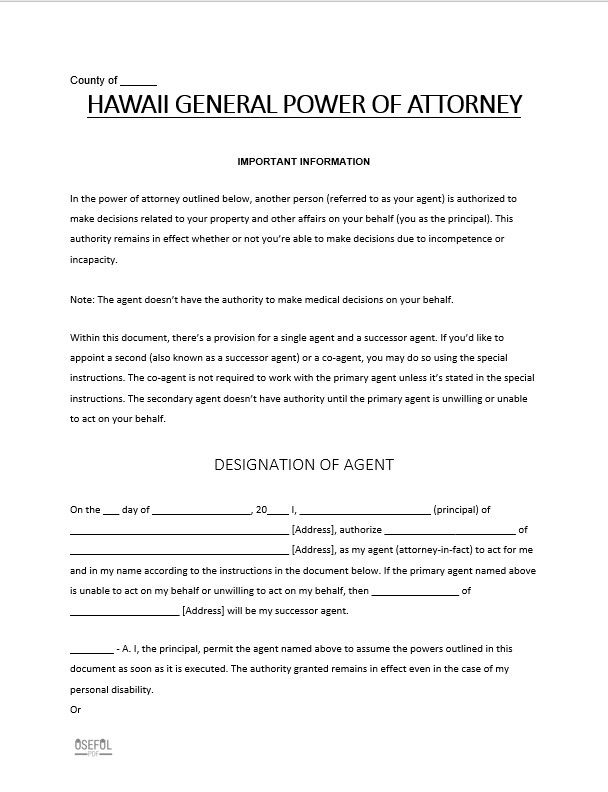 • Delegation Authority (HRS 551E-31) – A POA empowers an agent to act on the principal's behalf and to make decisions consistent with the terms of the agreement.

How and what to write

1. Obtain a copy of the Principal's Authorization Form.

2 – Determining The Grantee And The Grantor

After the document's heading, include the name of the party giving authority to the representative. Write the Principal's Full Name, just as it is listed in the title.

In the field immediately next to "Street Address," type in the Principal's Residence Address.

The words "hereby designate" should be followed by the agent's name.

The report must be completed by filling in the following lines with the principal's agent's residence state and address.

3 – The General Authority Subjects should be authorized.

It is a requirement that the Principal should initial the First Item authorizing the agent the right to "pay or collect any monies owed by the Principal.".

If the Principal wants to provide the Agent the "right to buy, sell, or rent private property."

If the agent is required to possess the "Power to Acquire, Lease, and Sell Real Property," the Principal should mark the 3rd line.

In section four, the Principal completes the blank line, which grants the Agent "Management Powers."

When the Principal initials the fifth item, the Agent Principal is granted Banking Powers.

In the seventh set of powers, "Tax Powers," the Principal grants authority to their Attorney-in-Fact after initialing the blank line.

When the Principal fills in the blank, item eight provides the agent with access to the Principal's safe deposit box.

When granting "gift-making powers" to the Agent, the Principal will need to mark the 9th line.

By initialing the blank line immediately before the lines "10. Lending and Borrowing," the Principal authorizes the Agent to borrow and lend in his or her name.

Item 12 is initialed by the Principal to grant health care power to the agent.

By inputting subject thirteen, the agent will be authorized to act on behalf of the principal.

By initialing the blank space in the fourteenth area of authority, the Principal authorizes the Agent to hire and pay for services.

Once Item 15 is signed by the Principal, the Agent is entitled to payment.

Using Item 17, "Other," the Principal can grant additional authority by simply providing instructions.

4 – Describe the duration of the agent's authority and powers.

In the following section, the Effective Period for which the authority to this legal document will be assigned is requested. The Principal should initial the line and add the words 'Upon the date...' if the powers contained in this form will take effect immediately after signing it.

The Principal may specify the date on which the Powers included in this document should be sent to the Agent by initialing the line following "The following..." and then indicating the specific date.

Next, we need to determine when the document was created by the Authority. This will be done after the Principal approves the selection. The Principal must initialize one of the three phrases "To indicate when this paper will be completed...".

'On the following...' should start the blank line if the Authority should expire on a particular date. type in the Termination Date there.

It should be noted that in cases where the Principal's authority under this contract terminates upon issuing a Written Revocation, they should begin the blank line with "After I have issued a written revocation."

In the case that the Principal's power under this instrument automatically ends upon incapacity (as determined by a doctor), it should begin with "When and if I become incapacitated..."

5 –The Authority Granted should be proved to the Third Parties

By signing the clause requiring third-party reliance in this agreement, the Principal has fulfilled the goal of the agreement. Before beginning this exercise, the Principal should fill in a date in the "In Witness Whereof..." section of this form. The statement will include a section for the Signature Date, Month, and Year.

After the Signature date has been supplied, the principal must sign after the "Principal's Signature."

It must be filled out with the principal's name on it.

The next page is titled "Appointment Acceptance." This section can only be used by the agent for recognizing the Principal Authority. In the blank section of the first sentence, enter the name of the agent. It is the designated agent's responsibility to sign and stamp their name under the words "Attorney-in-Fact's" signature.

Download our free Hawaii general power of attorney in an instant to create a legally binding document.

Download our free Hawaii general power of attorney in an instant to create a legally binding document.