The general power of attorney form is a legal document that’s created by a person called a principal. It grants another individual, known as the agent, authority to manage the financial and other matters of the principal. The powers given can be specific and narrow or they can be broad and extend to almost every area of the principal’s life. 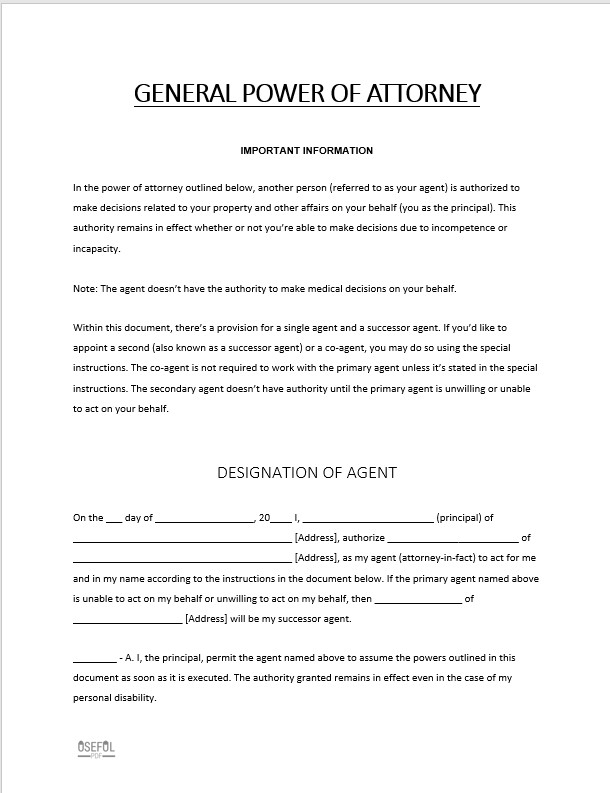 Other names for general power of attorney

Powers commonly granted with a general power of attorney

When is the right time to get a general power of attorney form?

It’s important to note that a power of attorney form can be useful to a wide range of people. There is no right or wrong time to start preparing. The main point is that if it can benefit you then creating one using our simple power of attorney document generator may be a viable option for you.

With that being said, here are some common scenarios where an executed power of attorney is useful:

What are the types of power of attorney forms?

General POA: This type of power of attorney gives the agent the ability to manage all financial and property-related affairs. Unless otherwise stated, the agent has general authority to act on your behalf as your alter ego.

Limited POA: This form makes it so that the agent appointed is limited in the types of decisions they can make. For example, it may limit them to decisions about bank accounts or insurance policies.

Ordinary POA: Like the general POA, the ordinary POA remains in effect while the principal is considered competent and hasn’t been incapacitated by an injury or illness. It may not have as much authority to act as a general or durable POA.

Durable POA: This is one of the most powerful financial instruments available and it gives the agent the authority to continue to act even if the principal is incapacitated or considered incompetent. It is terminated immediately if the principal passes away unless there are preparations that need to be made before the burial.

Motor vehicle POA - this power of attorney allows the principal the ability to appoint an agent that can handle matters related to their car. It’s required if you want to buy a car and have another person register for you.

How to select an agent

How should I choose an attorney-in-fact?

An attorney-in-fact is an important person in your life so the decision about who it should be is not something that can be taken lightly. At the very least, they should have a proven track record of accountability and trustworthiness in their professional or personal lives. In addition to your personal preferences, there are specific requirements before someone can be made an agent

It is possible to name more than one attorney-in-fact and give each one different types of authority. Or, you can choose a primary and secondary successor if the agent is unable or unwilling to perform certain actions.

Keep in mind that fiduciaries (lawyers, accountants, financial advisors, etc.) may also be named as the agent-in-fact.

The process to get a general power of attorney

Choose the agents and their authority

One of the first steps in getting a duly completed power of attorney is to decide on what kind of authority you will provide for the agent. The general power of attorney allows you to choose from over a dozen separate powers and even add in special powers as you see fit. Because of this, a lot of thought should be given to how you’ll structure the document.

In addition to choosing what powers the agent has, this is a good time to select your agent. That’s because the person chosen may impact which powers are granted. After making a selection, it’s possible to realize that they’re not a good fit for certain powers so those need to be withheld.

Now that you know which powers are important to you and who your agent is, you can start the process of drafting the power of attorney. There are two ways to go about it. First, you can download a free document from this page or you can scroll up and use our power of attorney form creator. We recommend the second option because you’ll just need to answer a few questions and your information will be filled without errors and the process will be much easier for you. Once you’re done with the POA creator, you’ll have a chance to review it before downloading. After it has been downloaded, be sure to print it with at least three copies so that you can sign them all at once. Initial next to the relevant powers and prepare for signing.

The signing requirements for a general power of attorney vary by state. Some states require two witnesses, some require a notary public to notarize, and others require both. You can view the specific state requirements here. With that being said, it’s always a good idea to get it signed by both witnesses and a notary public because it will strengthen the legality of the document. Of course, the signature of the principal is also needed.

After signing, share the original copies with the agent(s) you’ve chosen and keep your copy in a secure location. Be sure to inform a few people where you’ve kept the document so that they’ll be able to locate it in case of an emergency.

They’re similar in terms of the authority that each one gives the agent. The major difference is the fact that if something happens to the principal such as an injury that incapacitates them, the general POA would cease to function. A durable power of attorney continues even if the principal is declared incapacitated or incompetent.

FAQ for General power of attorney

When does a GPOA end?

By default, it will last indefinitely until certain conditions that can terminate a general power of attorney are met. Those conditions include when you create a revocation form for it, when the principal dies, when there’s a specific time frame stipulated in the POA, or when the principal becomes incapacitated.

Can I fire my Agent?

Yes. You have complete control over the power of attorney you create and can amend or revoke it at any time and in any way you see fit. While amending the power of attorney is possible, it’s considered best practice to create a new power of attorney form so that there won’t be any added complexity. If you decided to amend the POA, you should send a notice to all of the institutions that have dealt with the agent. If you revoke it then a revocation notice should also be sent.

Can anyone create a GPOA?

Will all financial institutions accept a General power of attorney?

Do I need a General POA for my spouse?

It’s a misconception to think that a spouse has access to all of your property and financial accounts. If the principal maintains separate accounts and property in their name alone then the spouse doesn’t automatically have access to them. If you would like to change that and give them access then a general power of attorney is needed.

Is the agent liable for their actions?

As long as an agent acts in good faith, prudently, in the best interests of the principal, and is accountable, they cannot be held liable for their actions. This is the case even if their actions end up negatively impacting the principal. That is why it’s so important to choose a principal wisely.

If an agent is negligent, does something illegal, or is not acting in the best interest of the principal then they may be held liable for those actions.

Will the general power of attorney extend to other states?

Most states have provisions in their laws that allow out-of-state general power of attorneys to function. Some powers may not be automatically transferable and the principal will need to go through certain processes before they are recognized in the state where the POA isn’t domiciled.

Download our free general power of attorney in an instant to create a legally binding document.

Download our free general power of attorney in an instant to create a legally binding document.