Living wills in Texas offer instructions to medical experts if the testator becomes incompetent or unable to communicate. If a person's illness is determined to be terminal, life-sustaining therapies may either be encouraged or stopped altogether. If the principal believes that it is necessary to make their aims crystal clear, they may accomplish so by providing precise guidance. The papers must be signed in the presence of at least two (2) witnesses before they may be considered valid. 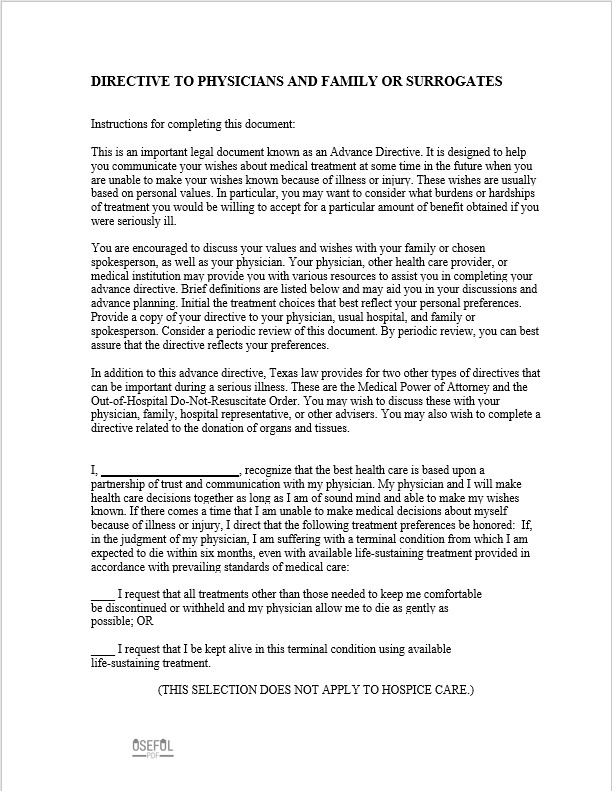 In the case of a terminal or irreversible condition, a directive issued under Section 166.032, 166.034, or 166.035 controls the administration, withholding, or withdrawal of life-sustaining treatment under the directive.

Laws and statutes to adhere to for the Texas living will

Requirements needed to complete the signing process- A living will be signed in the presence of at least two (2) witnesses to be valid in Texas (section 166.003). You are not permitted to call any of the following individuals as witnesses:

1. Decisions are taken by the declarant about health care or treatment;

2. People who are linked to the declarant either by blood or marriage are called relatives.

3. Estate distributions after the decedent's death, whether by will, codicil, or by operation of law, are considered inheritances.

4. The doctor who is now available for consultation;

5. One of the medical experts who has been assigned to the patient's treatment.

Step 1: Make certain that everyone involved has read the document and can express why it is advantageous to both the Declarant and his or her physicians and family members, in the first place, before proceeding.

·     The next two paragraphs should be read with special attention:

·     In the next step, the Declarant may choose one of the four options listed below by initialing the line that follows the initial in the selected option.

Step 3: Requests for Further Information — The third stage in the process is the submission of a request for additional information. Following a discussion with your doctor about your treatment preferences, it may be beneficial to make a list of any treatments you would want or don't want, such as intravenous antibiotics, artificial feeding, and so on. Do not forget to provide information about any therapies you do not want to undergo.

Step 4: Examine the signatures in light of how the directive relates to them while doing your analysis.

The declarant must be aware and agree that only therapies necessary to keep them comfortable will be offered after they have signed the directive and that no life-sustaining treatments will be administered to them after they have signed the directive. As a last resort, in the event that the declarant is unable to express their wishes and does not have a Medical Power of Attorney in place, the declarant has designated the following person(s) to communicate with their physician on their behalf in accordance with the declarant's considered personal values.

·     The name of the second designee

·     For the Declarant and everyone else involved to fully comprehend the Declarant's objectives, it is necessary for them to read the rest of this text.

·     Once they are completed with the form, the Declarant is required to sign it.

·     Enter the date of the signature in the following format: mm/dd/yyyy. • Enter the name of the person who signed the document.

·     Specify the declarant's city, county, and state of residence on the declaration.

Step 6-The declaration must be signed in the presence of at least two adult witnesses who are competent to recognize the signer's handwriting and sign their names beneath it. Witness 1 may not be anybody who has been granted the authority to make treatment choices for the patient, nor anyone who is connected to the declarant by blood or marriage. No part of the patient's inheritance, nor any claim to it made by this witness, may belong to this witness. It is not possible to employ this witness if he or she is not the attending physician or a member of his or her team.

Add your signature as the last touch to complete the document.

Add your signature as the last touch to complete the document.

Download our free Texas living will in an instant to create a legally binding document.

Download our free Texas living will in an instant to create a legally binding document.

The Arkansas Living Will also called an "Advance Care Plan", is a documented statement made by an individual to choose their treatment choices toward ...