An Oregon firearm bill of sale is used to show the lawful transaction of a weapon in the state. This document contains details about the vendor, the purchaser, and the weapon at the heart of the transaction. Because it can serve as documentation of a legitimate transfer of proprietorship, this form will need to be notarized. 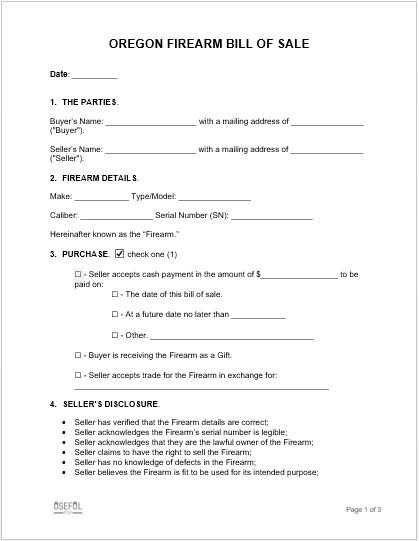 Any individual who can lawfully possess a weapon can also trade one privately, but according to ORS 166.435(2), the vendor and purchaser have to use a federally-authorized handgun merchant to carry out a background investigation on the purchaser before the completion of the transfer of proprietorship.

Any individual is barred from owning or buying a weapon under ORS 166.250(1)(c) if that individual:

There are no orders in Oregon that require gun owners to register their handguns with the state.

In Oregon, anyone who wants to have a concealed firearm has to first get a Concealed Weapon Permit from their local sheriff's department.

How to Request for a Concealed handgun permit

To apply for a concealed handgun license, you have to be no less than twenty-one years old.

Step 1: Visit the applicant's local sheriff's department and fill out a request for a Concealed Gun Permit.

Step 2: Fill out the application and include evidence of:

Step 3: Present the application to the sheriff's office in your area.

Step 4 – visit the local sheriff's division and submit a set of dactylograms and passport photographs.

Step 5: Pass the background scrutiny mandated by the federal government.

Step 6 – Within 45 days after receiving the application, the sheriff's office will either accept or reject it.

There are no laws in Oregon that recognize concealed carry permits from different states. On a case-by-case ground, county sheriff's offices might decide to overlook the occupancy demands for an Oregon Concealed Handgun Permit

Download our free Oregon Firearm Bill of Sale in an instant to create a legally binding document.