Oregon bill of sale forms provide vital information about personal item sales. The details concerning the item, and also the vendor and purchaser, are outlined in the form. These forms are mostly used for items with high monetary worth, like automobiles and watercraft. 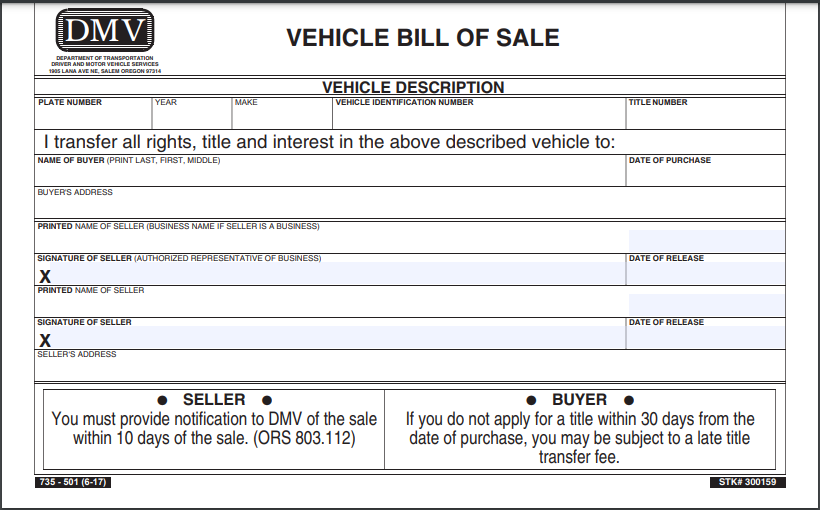 An Oregon boat bill of sale is a legalized paper that serves as proof of a vessel's proprietorship transfer in the state of Oregon. The document will highlight the details of the purchaser and vendor, as well as a description of the vessel being sold and the terms of its sale. The form may be needed for registration based on the situation of the proprietorship transfer, and it will be useful for tax reasons.

An Oregon firearm bill of sale is used to show the lawful transaction of a weapon in the state. This document contains details about the vendor, the purchaser, and the weapon at the heart of the transaction. Because it can serve as documentation of a legitimate transfer of proprietorship, this form will need to be notarized.

An Oregon general bill of sale is a legalized paper used to verify that a legitimate transaction of a personal item took place between two private people or businesses. The form asks for information on the vendor(s), the purchaser(s), and the properties(s) being transacted. This paper will need to be notarized.

An Oregon car bill of sale is a legalized paper that proves a vehicle's proprietorship has been lawfully transferred in the state of Oregon. The car, the vendor, and the purchaser will all be detailed on this form. This document does not need to be notarized, but the parties should keep it as a record. Within ten days after the automobile's sale, the vendor has to notify the DMV, and the purchaser has to register the car within thirty days of acquisition.

Download our free Oregon Bill of Sale in an instant to create a legally binding document.