A New York gun bill of sale is a legalized paper that verifies that a weapon was transacted, or transferred in accordance with all applicable regulations in the state of New York. The vendor, the purchaser, and the weapon at the core of the transaction are all identified in this document. It can be used as legalized evidence of a transfer of proprietorship from one party to another. This document has to be authenticated in the presence of at least two eyewitnesses. 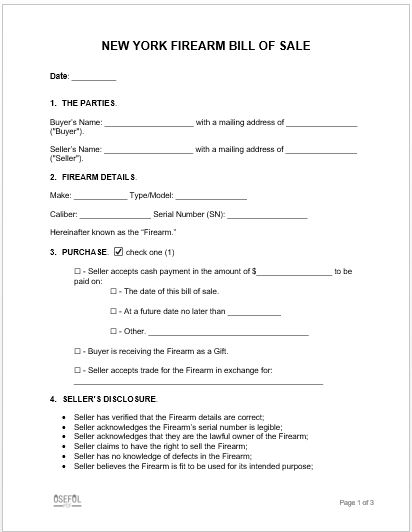 Trading a Weapon in Private

Anyone with an authorized New York State Pistol/Revolver Permit can privately sell a handgun in as much as they work with a federally licensed weapon merchant to do a federal background investigation on the potential purchaser.

A New York State Pistol/Revolver Permit is mandated for any New York state citizen who wishes to acquire a firearm, except in New York City. NY Penal L 400.00(1) prohibits anyone from acquiring a handgun if they are not:

Getting a Weapon Registered

To have a concealed handgun in New York, all inhabitants have to get a State of New York Pistol/Revolver Permit.

How to Request for a Concealed Carry

In New York, you have to be at least twenty-one years old to have a concealed weapon.

Step 1: Fill out a request for a Pistol/Revolver Permit from the State of New York (PPB3).

Step 2 – Include a passport photo of the applicant that was taken within the last thirty days of the request.

Step 3 – Provide evidence of a lawfully approved need or desire to carry a handgun.

Step 4: Send the application to the county in which the applicant resides or works.

Step 5 - Within six months after submission, the application will either be granted or rejected.

In New York, concealed carry permits from other states are not accepted.

Download our free New York Gun Bill of Sale in an instant to create a legally binding document.