A Florida firearm bill of sales form is a legalized document that proves a firearm was purchased, sold, or traded and undergoing a change of ownership in the state of Florida. All documents notarized are withheld until the individuals involved are present, identified, and witnessed by the notary public. It takes three (3) days from the day all types of firearms are purchased to the day they are delivered with the exception of holders of concealed weapons permit. 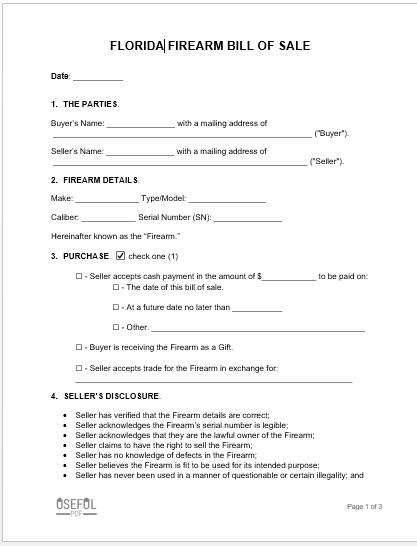 In Florida, it’s necessary to be a licensed manufacturer, dealer, or even importer before a sale or purchase is allowed. In other words, private individuals cannot sell firearms

According to the constitution Fla. Stat. § 790.23, it is considered illegal to possess a firearm for an individual who has committed an offense like;

In Florida, government agencies are not allowed to require the registration of firearms owned by residents of the state.

Residents are allowed to carry a concealed weapon in Florida if they have the proper license known as the Florida Concealed Weapon License.

Before applying, the applicant must be at least 21 years old, a citizen of the United States, be of sound mind and body (the body aspect is so they can properly handle the firearm). They must also be free of addiction to harmful substances i.e. cocaine.

Step 2 – Attach a color photograph that was taken within the past thirty (30) days.

Step 6 – Submit the application to the Department of Agriculture and Consumer Services.

Step 8 – The DACS will issue or deny the application within ninety (90) days of submission.

If the person in question is not a resident of Florida, they can carry a concealed weapon if they’re 21 years old, have a permit in their state of residence, and are a U.S. resident

Download our free Florida Firearm Bill of Sale in an instant to create a legally binding document.